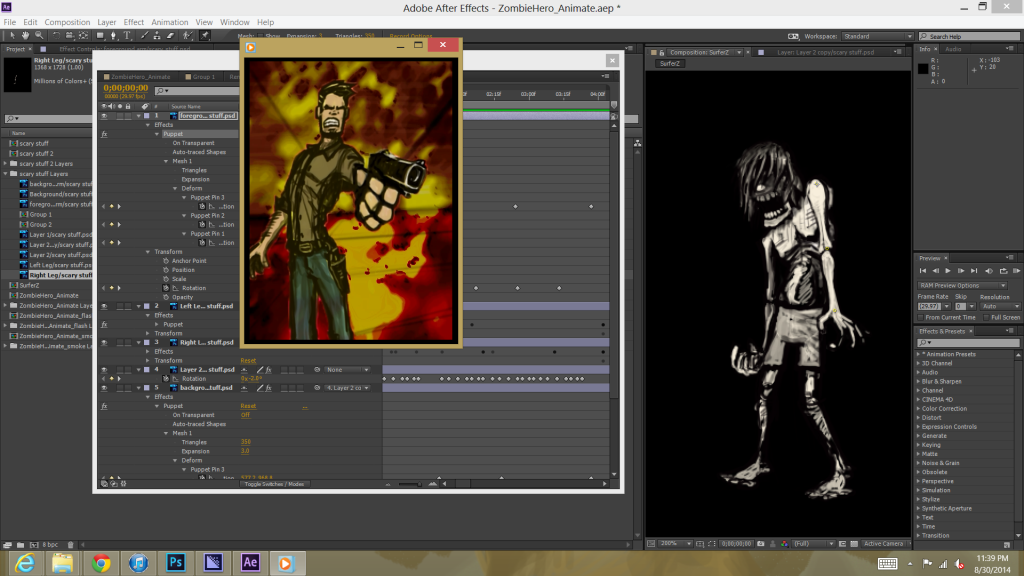 Working on some new material…

I’m a little late to the party, but I’ve just started really working out with the puppet features in After Effects, and it’s pretty fricken awesome. I was sitting back thinking about my next move and I noticed my screen looked really bad-ass, so I grabbed a screenshot and threw it up here :)

The other day, I had to call a client to discuss some work, and I borrowed an empty office to get some privacy.

While we spoke, I absently picked up the only writing implement on the abandoned desk – a red ballpoint pen – and started doodling on an old notepad the desk’s former occupant (or most-recent squatter) had left behind.

When the call was over, I had this drawing.  I kind of liked it, so I snapped a picture with my phone. 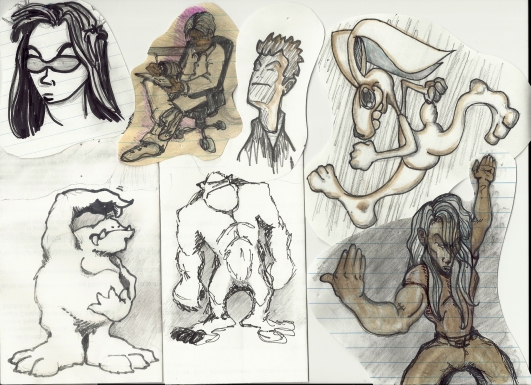 Girl on Fire: A Drawing Exercise

The Hunger Games trilogy really surprised to me… when my wife & daughter told me I should read the books a year ago, I smiled and said “You know, maybe I will” but in my mind I was thinking “I really don’t have time to spend reading a teenage girl romance novel.”  And so I didn’t end up picking up the first book until about 2 or 3 months ago… and then it was only because I was incredibly bored, and figured at least this would pass some time.

Once I started reading, I was almost immediately caught up in the premise, and the story moved at such an easy pace that I was 1/2-way through the book before I knew it.  I ended up burning through the triology in about 4-5 weeks (which is unusual for me, as I tend to read at a more leisurely speed.)

By the time I finished reading the books, the teaser-trailers for the movie had hit the Internet and I had a few weeks to digest what I’d read, and to wonder what the film interpretation would be like.  I’m not going to review the books, or the movie… all in all, I’ll just say that I really loved the books, and thoroughly enjoyed taking my wife and daughters to see the movie, so the Hunger Games is ‘win’ in my book.

Year of the Dragon: A Drawing Exercise

It’s been a long time since I drew a dragon.  I used to draw them quite a bit when I was a kid, but it’s been a while for sure.  I heard that 2012 is the year of the dragon, and a friend at work suggested I draw a dragon for the blog, so… here it is.

I didn’t get around to carving a real pumpkin this Halloween, so I figured I’d at least draw up a Jack-O-Lantern instead.

Sweet Dreams Are Made of This: an Illustration

When I’m asked to create illustrations for themed blog entries, the process – and the result – can sometime be pretty sketchy.  But this time, when asked to do an illustration for a Dreams-themed blog, the idea and the image came together really nicely.  That’s not to say that the idea came immediately… it didn’t.  But when it did come, it was clear and complete, and I could see it in my mind… which really helps the drawing process.

There are a lot of ways to represent dreaming… but I really liked this one.  It’s that innocent – and I think pretty universal – dream of just wanting to be with that person who makes your heart feel like a brightly-colored crayon drawing.

And that’s what my honey does to me… she makes me feel like a crayon drawing :)

When he asked, I was really busy… and really tired…

But rather than saying “No” or “Maybe next month” I decided to have some fun with him… and I sent him this :)

It still makes me laugh, even as I’m writing this.

In this version I pushed the character toward a cleaner, sleeker look, as opposed to the dirty/nasty look of the 1st draft.  But even as I was cleaning up his overall appearance, I still wanted my White Rabbit to seem menacing… dangerous… sinister.

I showed this design to handful of people, and ALL of them told me they found it very disturbing.  “Creepy” was the word most of them used.

Honestly, I really like the look of this guy… including his creepiness.  But based on the feedback, I’m going to go ahead and take another whack at this.  For the next version, I’ll see if I can come up with a character design that retains the sleek & dangerous feeling, but is less disturbing to look at.

When the Zombies come, I plan to be ready.  I’ve read the books… I’ve watched the movies… I’ve played the video games…  So armed as I am with all the necessary training, I fully plan to survive.

But you know what they say, Zombies laugh while men make plans… And I realize that even after all my intense preparations, there is always the chance that one of the filthy Undead will catch me offguard and put the bite on me.

In that event, I go to my backup plan… to be the most awesomest Zombie evar.

And yes, I will eat your brain… but it will be your honor.

The White Rabbit from Lewis Carroll’s ‘Alice in Wonderland’ is one of the great examples of iconic characters that have crossed over from literature into other media… from Jefferson Airplane’s psychadelic anthem, to Walt Disney’s kid-friendly animation, to a (none-too-subtle) reference in the Matrix, to American McGee’s video game, and Tim Burton’s recent CGI-filled film… for a character who wasn’t the main antagonist, nor main protagonist – and who appears in relatively little of the original story – the White Rabbit just captures folks’ imaginations… including mine.

With some encouragement from a friend, I’ve decided to try and craft my own version of the White Rabbit character, and to post various drafts as I work to tune in on the end result… this is the first edition.

Self-critique:  I think this White Rabbit is too angry, in a grumpy way… and also too dirty looking.  In my next round with this character design, I’m planning to push in a more subtley-sinister, and well-heeled direction.  I’d like my white rabbit to be dangerously charming. 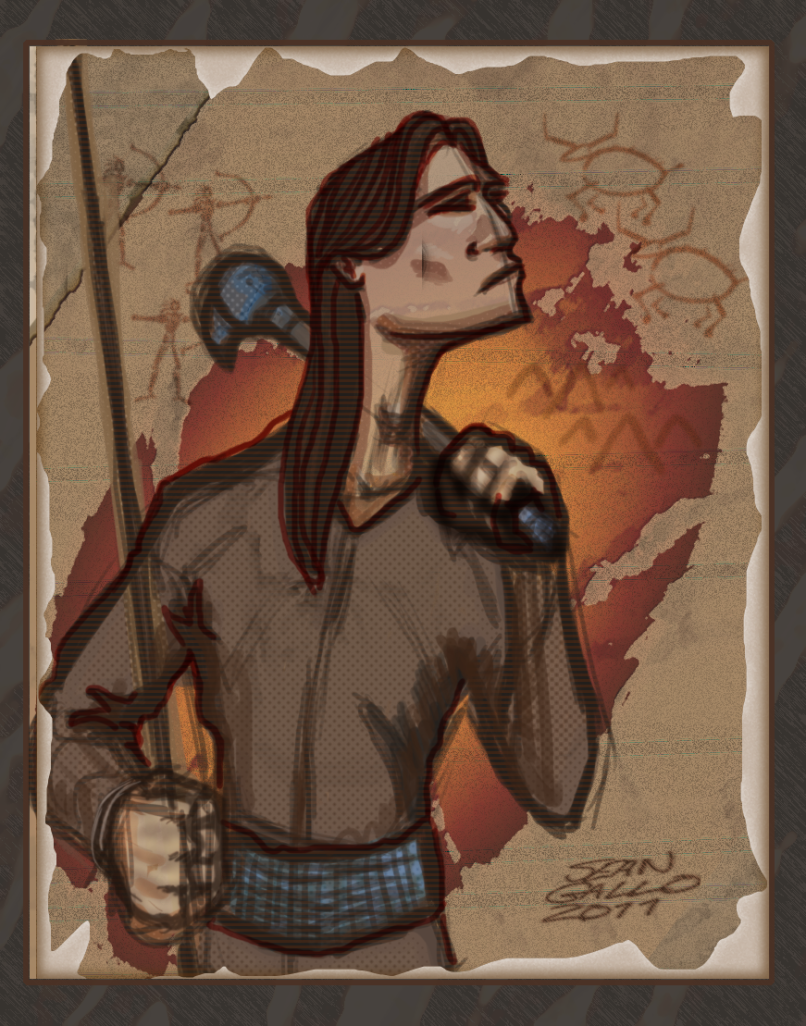 Quick – without thinking about it… what would you call the device in this picture?  A “Stoplight” – right?

But that’s not really the correct name, is it?  To be accurate, you should really call it a “Traffic Light” or something similar.  Yes, it does signal “Stop”… but it also signals “Slow Down/Caution” and “Go” just as well.

But still, most people I know would instinctively refer to it as a Stoplight.  Why is that?

I mean, it certainly isn’t a big deal.  It’s nothing that I’m going to lose any sleep over.  But it is kind of curious, and frankly, I needed something to write to go along with posting this picture that I drew ;)