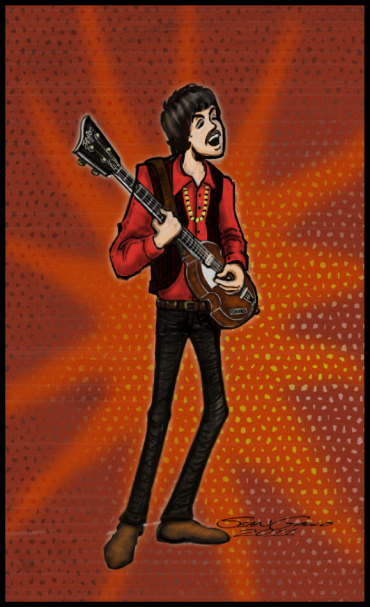 When They was Fab: a drawing of The Beatles (finally finished)

I think I’ve finished this drawing… it’s always hard to tell.  I know I could keep working on bits and parts of it… probably forever.

But for now, I think this is what I will call “done.”

It took a long time to get back to this, but here is the finished (for today anyway) version of my Beatles drawing “When They Was Fab”.  I’d posted this earlier as a work-in-progress… you can see here.

The full-sized, full-resolution print of this image is  25 inches wide x 19 inches high.  Now that it’s finished, I’m really excited to have it framed… although it’s gonna cost me an arm and a leg, for sure!  I plan to hang it up in my man cave… whenever I finally get a man cave…sigh* Until then, it will go in my family room, alongside a nice print of a mural I painted in college, and comical collection of photos of me and my girls.

One of the characteristics I really like about this drawing, is that it reminds me of a diorama.

You remember dioramas – right?  Back in grade school, you would get an assignment to create a 3-dimensional scene depicting George Washington chopping down a cherry tree, and you were to build the whole thing in a shoebox using crayons, magic markers, bits of construction paper and a LOT of Elmer’s glue.  You remember – right?

So it occurs to me that if I had any gumption (yeah, I said gumption) I would print out the separate elements of this drawing, and construct an actual 3D diorama out of them.  I could frame it in a glass box and light it from behind.  That would be cool… I wonder if I’ll ever do it ;)

They wanted a Rock God… they got Jim: JIM MORRISON 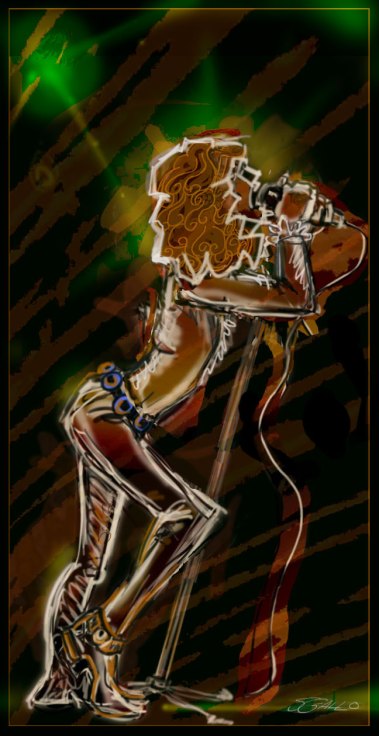 “I am the Lizard King… I can do anything”

About a month ago I watched the film “When You’re Strange”… an artful documentary about the Doors, featuring Narration voice-over by Johnny Depp.  The movie focuses on the Doors’ legendary singer-front man, Jim Morrison and it portrays him in a way that seemed new to me… I mean, I’ve been familiar with Jim Morrison for a very long time… but after watching this movie, I felt like all this time I had been missing something really special, and that now I finally “got it.”  I’d say that’s the sign of a really good documentary.

So inspired by my new feelings about who/what Jim Morrison really was… I drew this characterization sketch.

The Beatles on iTunes – The Apple is Whole…* 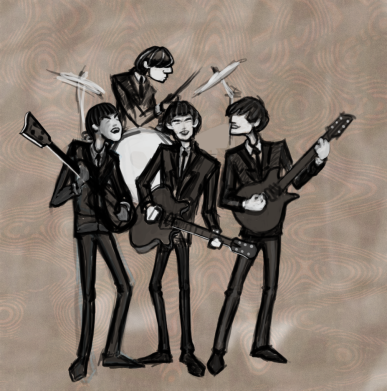 I’ve been really busy at work lately… but even I couldn’t avoid hearing that The Beatles are finally on iTunes.

I may be a little late with this – like I said, I’ve been REALLY busy – but I thought I should post one of my Beatles drawings to mark the event.

This is my original sketch/study, which ended up being the basis for my current work-in-progress, When They was Fab.

When They was Fab… (work in progress)

The Beatles are a great story… ever since I was a kid I’ve had a fantasy about being there with Paul, Ringo, George & John scrappin it out on stage way back in those early days in Hamburg.  Here is my interpretation of that fantasy.

This is a scaled-down version of the work in progress – the actual drawing is 19×25 inches… looking forward to having a print made and framed.

My buddy Craig has a really big head.

Presumably that would mean he’s got a really big brain too – wouldn’t it?  Maybe that’s why he writes so many damn blogs. His big ol’ brain just keeps churning out idea after idea… and blogging gives him a place to dump them all.

Lately he’s been siezed by a fit of Beatle-Mania which <sarcasm>surprisingly</sarcasm> has resulted in several more blogs.

His latest one is a response to some folks who questioned whether or not it’s productive for someone in his business (the DJ business) to spend time writing blogs about the Beatles.

The blog answers that question, by posing another question (a nice  Socratic approach)…

What is a DJ SUPPOSED to Know About…?

Craig goes on to argue that music is a DJ’s stock & trade… you want your DJ to be knowledgeable about music… and researching and writing about one of the greatest music groups of all time is therefore consistent with what a DJ OUGHT to be thinking about.

He sent me a draft of his blog… asked for my opinion on it… and then asked if I would be willing to provide another illustration [see Octopus].

But, he said he didn’t know what kind of picture would make sense…

So I whipped off this little doodle here…

Music for your mind

The sketch above is the one I sent Craig for his blog.

I had cranked that one out real quickly right before running out the door… so I didn’t spend too much time staring at it (which I usually DO)… so when I looked at it again later that night, it was kind of “new” to me.

I really liked it… and I couldn’t stop looking at it.

Turns out… I wanted to play with it some more.

Eventually I tuned in on this “poster” treatment… which makes me laugh… which is good.

This is Your Brain on Music