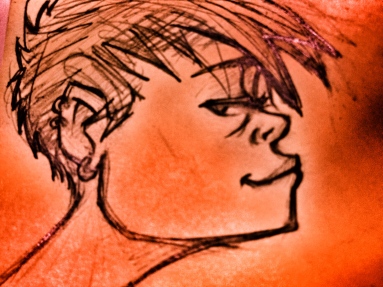 I’ve been trying to be more disciplined about my drawing and practice [almost] every day.  Like they say… if you don’t use it, you lose it.  I’m also trying to work on things that I usually find difficult.  Here are a group of female facial expressions that I challenged myself with.

Like most people – artist or not – the face I’ve studied more than any other is my own.  When staring into the mirror trying to understand how an eyebrow arches, or what shape the mouth makes when surprised… it has always been a guy’s face staring back at me.  And so naturally, I’ve always had an easier time drawing male faces and a bit of trouble drawing convincing female faces.

Because female faces don’t come naturally to me, I’ve always tended to stick to a very few expressions… and most of them haven’t been very animated.  Here I tried to push myself a bit with face shapes, expressions and hairstyles.  They’re still a little bit hard-edged (slightly masculine) but I feel good about the exercise.  It keeps me honest.