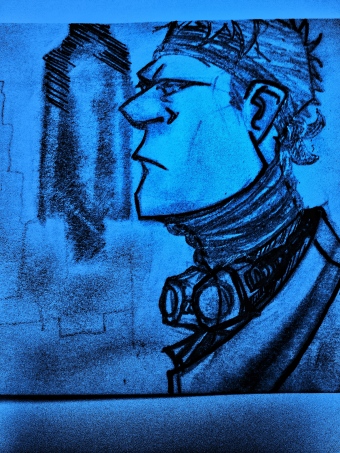 Year of the Dragon: A Drawing Exercise

It’s been a long time since I drew a dragon.  I used to draw them quite a bit when I was a kid, but it’s been a while for sure.  I heard that 2012 is the year of the dragon, and a friend at work suggested I draw a dragon for the blog, so… here it is. When the Zombies come, I plan to be ready.  I’ve read the books… I’ve watched the movies… I’ve played the video games…  So armed as I am with all the necessary training, I fully plan to survive.

But you know what they say, Zombies laugh while men make plans… And I realize that even after all my intense preparations, there is always the chance that one of the filthy Undead will catch me offguard and put the bite on me.

In that event, I go to my backup plan… to be the most awesomest Zombie evar.

And yes, I will eat your brain… but it will be your honor.

Headshot, Zombie Down: an Animation Exercise

Here’s another animation exercise done in Pencil.exe.  Yeah – it’s a bit gory… but if you’re gonna draw zombies, then you’re gonna have to scramble some brains now and then.

I know I’ve complained about the buggy-ness of the freeware Pencil 2D program, but I really love the rough, sketchy feel it allows you to create.  It’s like drawing with a PENCIL… lol.  If this program got some serious funding behind it, it could be straight-up awesome!

This is by far the most detailed animation I’ve done in the Pencil 2D animation program to date.

Here is another quick animation exercise.  I did this one because I wanted to work out the shape of a handgun being held along with the action and rhythm of a handgun being fired.  I exaggerated the muzzle flash and the kick for effect.

Like the rest of the animations I’ve posted so far, this one was done in the freeware program, Pencil 2D.  One thing I love about this program is the awesome “sketchy” feel it allows me to get… as opposed to Flash, which has this annoying tendency to smooth out my lines too much.  The best hand-drawn animation program I’ve used to date, is Toon Boom.  But I fouled up my install many months ago, and I haven’t gotten around to repairing it.

Like I’ve said before, Pencil 2D is great for short exercises like this one, but it’s not at all suited for full-length scenes – let alone an entire film.  But as I churn out more and more of these little quickies… I start to wonder… what kind of short film could somebody actually create as a sequence of 5-second & 10-second clips?  Hmm… that’s something to chew on… for me anyway… *

Another rough animation done in ‘Pencil’… this is a great tool for these quick exercises.

I’m a World-Famous Animator… sort of

It’s only natural that my love for drawing and my love for music would come together as a love for animation, and – – – Oh… I didn’t mention that I dabble in animation…?  And I forgot music too? Huh – weird…

Historical Note: I’ve been told that the KO Title Sequence was the first ever Animated Theme Song intro of any YouTube Channel… And while I’m not at all not sure how true that really is… it’s still really cool that I’ve been told that!

Well, I guess I just figured that the Opening Sequence for KatiesOpinion made that kind of obvious… I mean, you do remember KatiesOpinion – right…?  What… NO…?!? Why that’s preposterous!!! EVERYONE knows KatiesOpinion!  On what planet do you spend most of your time?!?  I mean seriously – WTF!?!  Why don’t you try pulling your head out of your – – – !!!

I know, I know… of course I’m just kidding. I know KatiesOpinion was never THAT big… But it was kind of popular… back in the good old days… waaaayyyy back when in the olden times of 2006-2008