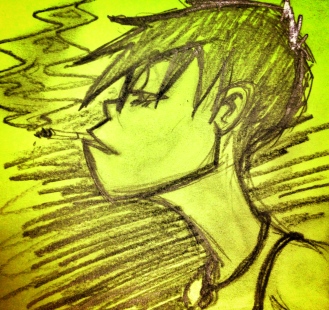 I’ve been trying to be more disciplined about my drawing and practice [almost] every day.  Like they say… if you don’t use it, you lose it.  I’m also trying to work on things that I usually find difficult.  Here are a group of female facial expressions that I challenged myself with.

Like most people – artist or not – the face I’ve studied more than any other is my own.  When staring into the mirror trying to understand how an eyebrow arches, or what shape the mouth makes when surprised… it has always been a guy’s face staring back at me.  And so naturally, I’ve always had an easier time drawing male faces and a bit of trouble drawing convincing female faces.

Because female faces don’t come naturally to me, I’ve always tended to stick to a very few expressions… and most of them haven’t been very animated.  Here I tried to push myself a bit with face shapes, expressions and hairstyles.  They’re still a little bit hard-edged (slightly masculine) but I feel good about the exercise.  It keeps me honest.

Got Walking Dead? Kill the Head!

The Walking Dead on AMC.  Sweet.

I was turned on to the comic (or graphic novel, I guess… I’m never sure) around a year or so ago.  I loved it right away.

The combination of the brilliant story written by Robert Kirkman, and the striking illustrations by Tony Moore, just really does it for me.  Both the story and the drawings in The Walking Dead are direct and efficient, without ever appearing to be anything less than Kirkman’s and Moore’s very best effort… on every page and every panel.

Maybe it was foolish of me, but I was a caught off-guard when Frank Darabont’s TV version chose to use a different opening sequence than the one from the comic.  I guess the opening sequence in the book worked so well for me that I couldn’t imagine anyone feeling the need to rewrite it in any way.  I mean the screenplay AND the storyboard/shotlist were all right there… why wouldn’t you just USE them?

But once I got over my surprise – and reset my expectations – I was able to thoroughly enjoy watching the show.

I mean, when was the last time any of us had the opportunity to watch a TV series about Zombies?  And this series is going to based on some top-notch source material… it would be a real waste not to enjoy the ride.

Here’s another Zombie drawing, in honor of the Walking Dead on AMC.  DVR – RecordSeries – Check.

It’s almost Halloween, and all procrastinators are hurrying around trying to get a costume together.

So I figured I’d share the design I made for the super-cutesy, matchy-matchy homemade costumes that Kim and I put together last year.  Worker Bee & Queen Bee.

The real costumes came out amazingly-similar to the drawing – with the addition of big, oversized sunglasses… yellow frames for me, and rhinestones for Queenie – and were well received at the party.  Kim found a yellow shirt with black stripes, and I put the stripes on mine with hockey tape.  The yellow hardhat was just a few bucks at the Home Depot, and the jewelry was easy to find in the kids’ toy aisle… I already had the tool belt.

So there you go – if I’ve saved one procrastinator’s Halloween, then I’ve done my job.

UPDATE… I’ve been meaning to upload a photo of the finished costumes, but have totally forgotten… until now… 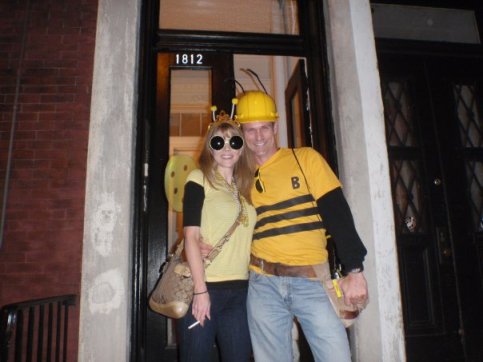 This isn’t the best photo, but it’s the only one I’ve got handy… and don’t ask me why I’m standing like that… I blame the steps :)

Wow – it’s been a busy summer/fall for me in my non-artistic life!  I’ve only recently started doing some drawing again… and it’s been a reinvigorating experience.  Creative expression really does help my state of mind.

I’ve picked up on the Zombie project idea again, and started designing some of the non-Zombie characters who are going to have to survive in the world of the living dead.

MARCUS (front-center):
college student… was on a canoe trip when the Zombie outbreak swept through the cities, towns, and well… campuses.  He got back to the dorm… had a look around… and decided to head for the hills… literally;

TREVOR (front-left):
art-school dropout & vagabond… was crashing at an acquaintance’s hunting cabin when the dead came to town… and that’s right where he was when Marcus found him;

HOOPS (back-center):
biker/mechanic… stays on the move riding with his motorcycle club and kicking Zombie asses along the way… “Live to Ride, Ride to Live” has taken on new meaning… while running for their lives from a pack of TEETH, the boys are saved when Hoops and Co. happen on the scene… suffering a broken ankle in the scrum, Hoops decides to stay with the boys for a bit while he heals;

VALERIE (front-right):
USMC Combat Rifle Company squad-leader whose team was eviscerated when a call to “quell a riot” in Trenton NJ put them in the path of several-hundred Zombies tearing through the city… after barely escaping across the river, Val comes looking for provisions at the mall.

That’s it for now… look for more… sooner or later.

And remember – Kill the Head! When business gets messy… they call in the Heavy Hand…

I’m a World-Famous Animator… sort of

It’s only natural that my love for drawing and my love for music would come together as a love for animation, and – – – Oh… I didn’t mention that I dabble in animation…?  And I forgot music too? Huh – weird…

Historical Note: I’ve been told that the KO Title Sequence was the first ever Animated Theme Song intro of any YouTube Channel… And while I’m not at all not sure how true that really is… it’s still really cool that I’ve been told that!

Well, I guess I just figured that the Opening Sequence for KatiesOpinion made that kind of obvious… I mean, you do remember KatiesOpinion – right…?  What… NO…?!? Why that’s preposterous!!! EVERYONE knows KatiesOpinion!  On what planet do you spend most of your time?!?  I mean seriously – WTF!?!  Why don’t you try pulling your head out of your – – – !!!

I know, I know… of course I’m just kidding. I know KatiesOpinion was never THAT big… But it was kind of popular… back in the good old days… waaaayyyy back when in the olden times of 2006-2008