When They was Fab: a drawing of The Beatles (finally finished) 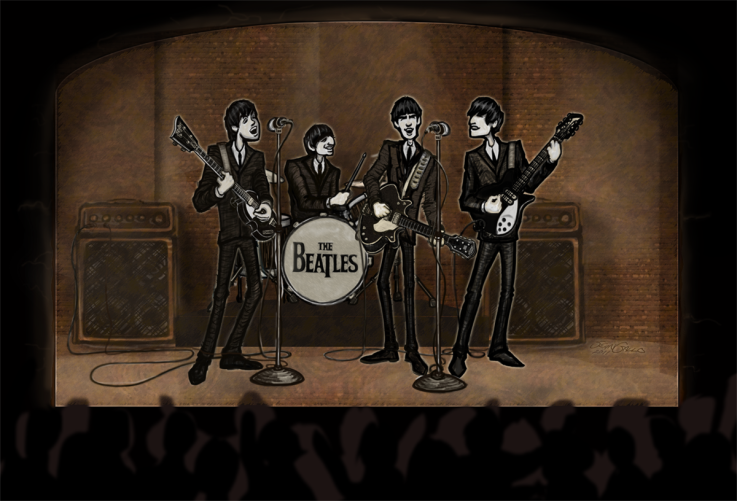 I think I’ve finished this drawing… it’s always hard to tell.  I know I could keep working on bits and parts of it… probably forever.

But for now, I think this is what I will call “done.”

It took a long time to get back to this, but here is the finished (for today anyway) version of my Beatles drawing “When They Was Fab”.  I’d posted this earlier as a work-in-progress… you can see here.

The full-sized, full-resolution print of this image is  25 inches wide x 19 inches high.  Now that it’s finished, I’m really excited to have it framed… although it’s gonna cost me an arm and a leg, for sure!  I plan to hang it up in my man cave… whenever I finally get a man cave…sigh* Until then, it will go in my family room, alongside a nice print of a mural I painted in college, and comical collection of photos of me and my girls.

One of the characteristics I really like about this drawing, is that it reminds me of a diorama.

You remember dioramas – right?  Back in grade school, you would get an assignment to create a 3-dimensional scene depicting George Washington chopping down a cherry tree, and you were to build the whole thing in a shoebox using crayons, magic markers, bits of construction paper and a LOT of Elmer’s glue.  You remember – right?

So it occurs to me that if I had any gumption (yeah, I said gumption) I would print out the separate elements of this drawing, and construct an actual 3D diorama out of them.  I could frame it in a glass box and light it from behind.  That would be cool… I wonder if I’ll ever do it ;)

When They was Fab… (work in progress) 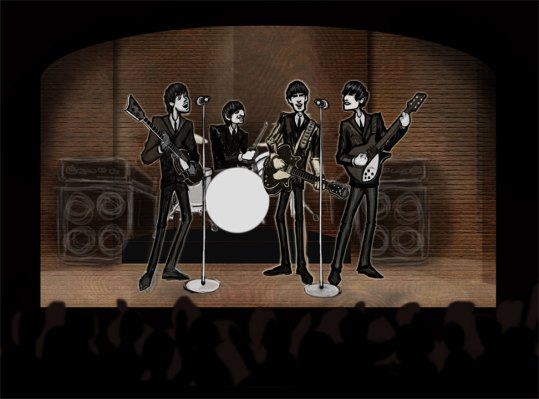 The Beatles are a great story… ever since I was a kid I’ve had a fantasy about being there with Paul, Ringo, George & John scrappin it out on stage way back in those early days in Hamburg.  Here is my interpretation of that fantasy.

This is a scaled-down version of the work in progress – the actual drawing is 19×25 inches… looking forward to having a print made and framed.

George Harrison: Something in the Way…

Here’s another commission for Craig @ www.Cuttingedgedjs.com/blog 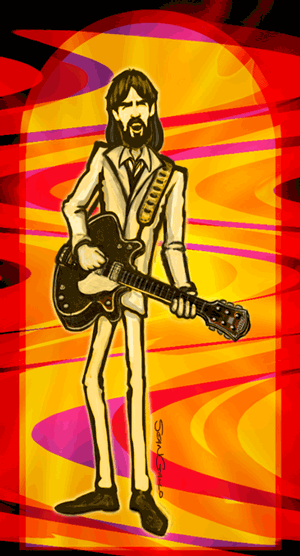 They called George Harrison “The Quiet One”.  Well you know the saying “You’ve got to watch out for the quiet ones… they’re the ones that will get you.” – or something like that… whatever.  The point is, that while I was working on this drawing, I learned something about “Quiet George”.  It seems that under the quiet exterior, the youngest Beatle  really didn’t like to be screwed with.

Have you ever heard of a Beatles tune called “Only a Northern Song”? I hadn’t… at least not as far as I can remember.  And if I had heard of it before, I’d obviously forgotten.

While working on this drawing, I looked up a list of Beatles songs written by George Harrison [used as background in an earlier version of this pic] and I saw that song title and couldn’t place it.  So I went over to YouTube and and looked it up. You can listen to the song and read along with the lyrics here.

So, the point of the story – apparently The Beatles were under contract with Northern Songs Ltd.  And, one day George actually read his contract.  He found out that although John Lennon & Paul McCartney were contracted to receive song-writing royalties, George Harrison and Ringo Starr were contracted as mere session musicians.  In other words George & Ringo got paid to show up and play, but that was it.

So a pissed-off George Harrison wrote this stinking train-wreck of a song in protest.  The lyrics are pretty clear… “Ill never see any royalties, so I don’t have any reason to make this a good song”!

I think people who know me would say that is the kind of thing I would do in the same situation… so there you go.  One reason for me to like George Harrison.  Maybe I will read about him…

In a Cephalopod’s Back Yard

Craig from Cutting Edge Entertainment does a blog on music-related subjects, and he recently got on a Beatles kick.  He’s been reading a bunch of books, and I guess, a bunch of blogs.

Sometime last week he came across a blog posting that offered one particular person’s list of the Worst Beatles Songs ever.  On that list was Octopus’s Garden – written and sung by Beatles’ drummer and lovable comic-relief… Ringo Starr.

Craig didn’t think that seemed right… I mean, bashing on Octopus’s Garden somehow seems to be in the same class with screaming at cuddly kittens.  So Craig decided to do a blog of his own in response… and he asked me if I’d do an illustration of an Octopus to go with it.

I don’t think I’ve ever drawn an Octopus before… and I happen to be a big fan of Ringo Starr (not so much the musician, but more the persona)

And here it is… 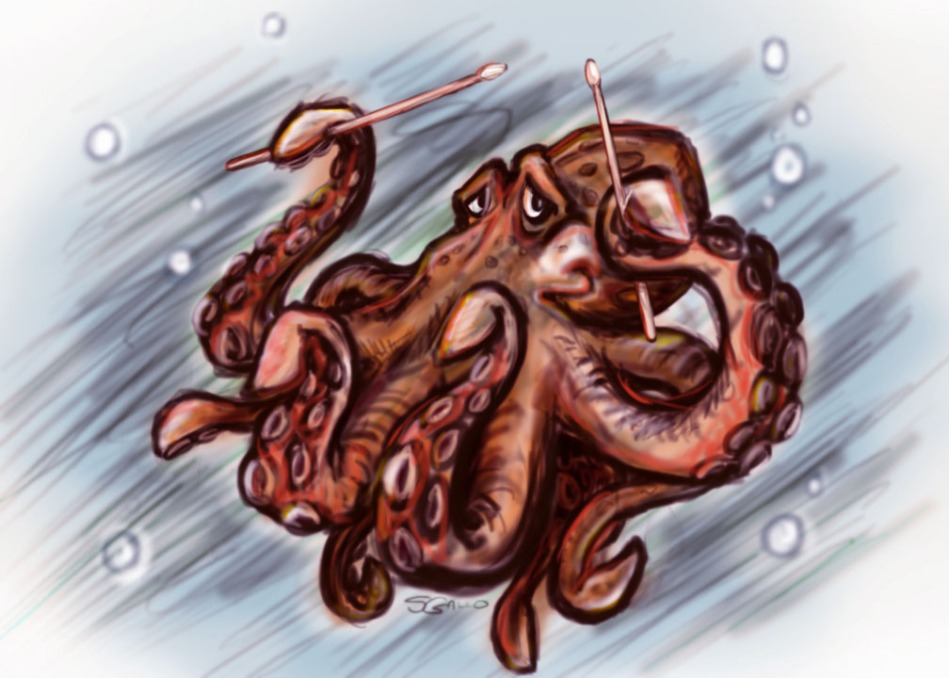 And for what it’s worth… I’d tend to agree with Craig on this… Octopus’s Garden is just too damn cheerful to be placed on any “Worst Of” list.

Thanks for the smiles, Ringo.