Ya know – it doesn’t make one bit of a difference to a Zombie what plans YOU may have had for the day, oh no…

Come here so I can eat you!

I think this may be my favorite of all my Zombie sketches so far.  It captures the look and the style I was after throughout this exercise.  I’m really satisfied with this one.

At least for a while…  I’ve got some other doodles that I want to give a little time to.

But you know Zombies… you can’t ever really get rid of ’em… not really.

Not every Zombie is of the vacant-expression, shuffle & moan variety.  In fact, some of my favorites have been the ferocious, screaming & hurtling sort, like the ones in the 2004 ‘Dawn of the Dead’ remake.

<< NOTE:  Fast Moving Zombies (FMZ’s) like those in the 2K4 DOTD, should not be confused with the rage-virus-infected ‘Ragers’ seen in flicks like ’28 Days Later’! FMZ’s are undead… ‘Ragers’ are alive. These are 2 very different threats, which require very different tactics if encountered (educate yourself) This has been a PSA from seangallo_designs… we now return you to your regularly-scheduled blog >>

It occured to me that my first 2 Zombies–while they were certainly ghoulish enough–just didn’t look as though they’d be all that difficult to escape from. Either one of them on their own, or even both of them together, probably wouldn’t pose any sort of urgent threat.

Of course as the world slowly & steadily fills up with more and more of these shambling, starved-for-brains creeps… well, at some point it doesn’t matter how fast you can run, cause wherever you run… there they are.  And of course it’s exactly that slow but exponential escalation of danger that’s the real genius behind the traditional Zombie flick.

But then… seeing an undead creature that wants to eat your brain (and your leg… and your face) sprinting at you at top-speed… well, there’s something very special and immediate about the kind of primal fear that speaks to.

And so, that’s where this guy comes from… here representing for all the FMZ’s… Zombie number 3. 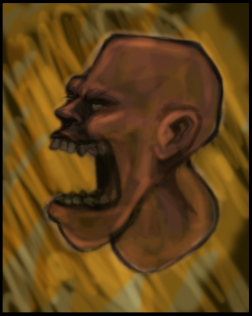 … the better to EAT you with!
CLICK FOR FULL-SIZE