The DEAD walk the earth!

NO living soul is safe!

Can ANYONE save us from the ZOMBIE hoards?

Alright… so, I’m thinking this is a good time to stop and clear something up…

I DO NOT JUST DRAW ZOMBIES & other creatures of the night!

Yes, I know… if all you have to go on are the pics I’ve posted to this blog so far… well, I can see how you might get the wrong impression.

But the truth is, these pictures that I chose for starting off my blog, just happen to be based on a theme… which just happens to be a hypothetical Zombie Movie.

The fact that Zombies are the subject is really just a coincidence… I mean – I draw all kinds of stuff… seriously. Don’t believe me..?

Well then, just look at the picture in this post! 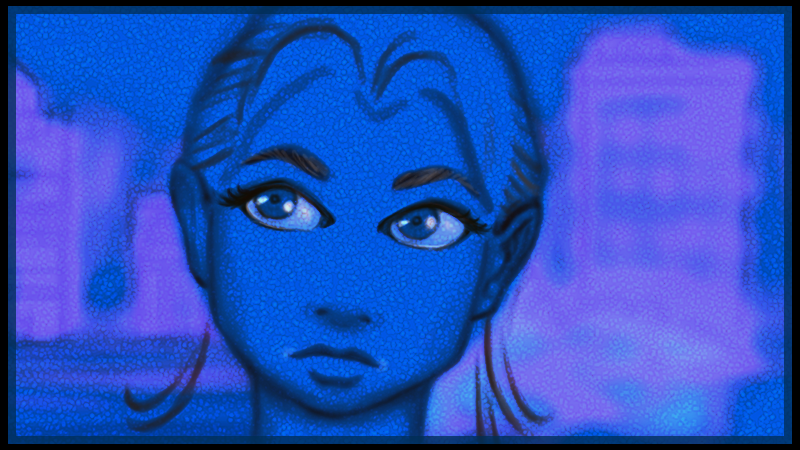 OK, granted… so this IS another sketch from my “Zombie Movie Concept Art” series… BUT… there are NO MONSTERS in sight!  Not a one!

So there you go then… proof-positive that I’m a pretty awesome guy, and you think hanging out with me would be pretty cool… and not creepy… or disturbing… and stuff.

So this sketch is another quick character study.

I had decided that the hero of the story should be a young girl, and that she should have a slight melancholy mystery about her (faint emotional scars from a past she doesn’t talk about, maybe?) and the subtle suggestion of a deep strength–possibly a dormant fury–not to be taken lightly.

This one has a destiny, oh yes… and it’s bad news for the Zombies.  Ooh… dramatic… right?  Shades of ALICE…? Perhaps…

Though I honestly didn’t realize that until I saw RE:E for the 1st time last week.

Now, it probably shouldn’t surprise anyone to hear that this drawing began with the eyes.  In fact, the eyes are the only part of this drawing that I spent any real amount of time on… looking to convey that mystery-quiet-danger-girl thing.

Craig saw this picture and started calling her “Blue”… which seemed fair enough.

Not every Zombie is of the vacant-expression, shuffle & moan variety.  In fact, some of my favorites have been the ferocious, screaming & hurtling sort, like the ones in the 2004 ‘Dawn of the Dead’ remake.

<< NOTE:  Fast Moving Zombies (FMZ’s) like those in the 2K4 DOTD, should not be confused with the rage-virus-infected ‘Ragers’ seen in flicks like ’28 Days Later’! FMZ’s are undead… ‘Ragers’ are alive. These are 2 very different threats, which require very different tactics if encountered (educate yourself) This has been a PSA from seangallo_designs… we now return you to your regularly-scheduled blog >>

It occured to me that my first 2 Zombies–while they were certainly ghoulish enough–just didn’t look as though they’d be all that difficult to escape from. Either one of them on their own, or even both of them together, probably wouldn’t pose any sort of urgent threat.

Of course as the world slowly & steadily fills up with more and more of these shambling, starved-for-brains creeps… well, at some point it doesn’t matter how fast you can run, cause wherever you run… there they are.  And of course it’s exactly that slow but exponential escalation of danger that’s the real genius behind the traditional Zombie flick.

But then… seeing an undead creature that wants to eat your brain (and your leg… and your face) sprinting at you at top-speed… well, there’s something very special and immediate about the kind of primal fear that speaks to.

And so, that’s where this guy comes from… here representing for all the FMZ’s… Zombie number 3.

… the better to EAT you with!
CLICK FOR FULL-SIZE

I thought about it for a little bit and decided to do one post for each of the Zombie-series sketches, and to post them in the same order that I drew them.

Not a huge decision, I know… but maybe seeing these in the order they came to life (or is it death…?) will mean something to someone… maybe not.  Either way, now I won’t have to spend any time thinking about which one do I post next, and then which one do I post after that… I hate unnecessary thinking :|

“…prepare your mind and your body for any contingency you can anticipate.  It’s the lazy person’s way–and I do hope you are wise enough to be lazy…”

I also decided that, like these drawings–deliberately done quickly & w/o too much thought–these posts will be brief and more or less off the cuff.  But I tend to ramble once I get started, so we’ll find out together how well that works out.

So without further adieu (ah-doo?) here is the 2nd of my walking corpses… You uh... ya got a little something on your chin there...

In this one I feel like I got a little too distracted by playing with some of the little details… like the slobber, the cracked window, & the earring… and as a result, I missed the target a bit… something is off with the whole.  The balance, energy,  motion… kind of “meh”.

But in the end, I like some of the things I did here… I surprised myself with the color work, for one thing… and it reminded me to be more immediate, and to let the details take care of themselves.

So I was talking with my friend Craig, from the KatiesOpinion project  (blog on that soon) and we got to jawing about Zombies… which isn’t really all that unusual, since Zombies have been a serially-recurring topic of conversation between me and Craig since like… forever.

Now it’s not like Zombies are our primary common interest… I mean, we don’t talk about Zombies everytime we hang out or anything like that.  But it’s also not random or strange for one of us to just spit out a question like “OK – so what’s the best weapon in this room, if the Zombies came right now?”

And please keep in mind…  it’s not a question of whether Zombies might come… cuz they are coming, alright.

It’s only a question of when will they come…  AND when they do come…  will you be prepared?

So anyway, me and Craig got to jawing about Zombies, and he was telling me again (cuz he’s told me before) about how much he would love to make a really great Zombie film.

Now Craig has some really sharp ideas about what would make a really good Zombie flick, and so we ended up spending the next hour or so going over plot devices, settings and storylines for the world’s BeSt EvaR ZomBie movie.

On the drive home later my head was filled with images of the Living Dead, so when I got home I started in to sketching, and this gentleman [below] is pretty much the 1st thing that came out. 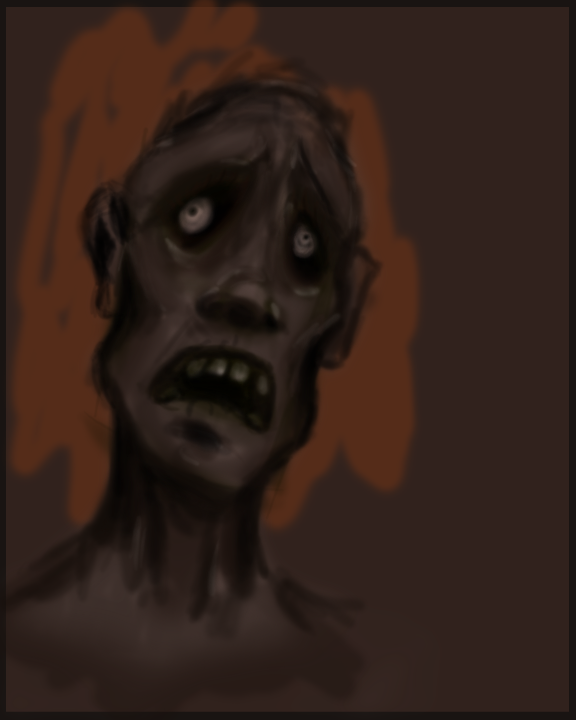 Now in the interest of full-disclosure, I did come back to this drawing and clean it up a couple of times after the initial sketch, but I tried to leave it pretty much the way it was born.

I liked this one so much, that I followed it up with a few others… not all Zombies, but all character drawings based on the very loose storyline Craig and I whipped up that night.  I’ll post some of the others soon.

My Wife is a Blood-Sucker

I can’t remember whether Kim read ‘Interview with the Vampire’ before or after the movie came out, but what I do know is that her natural affinity for dark fantasy creatures combined with her love of a great novel was kicked into overdrive when she saw that jerk-off Brad Pitt…

(and for the record, I call him a j/o simply because I feel that any guy so rich & famous and so universally adored by the women of the world NEEDS to be hated on by his fellow men… otherwise he’d eventually go completely insane and become a danger to himself by taking up activities like attempting to walk from his yacht to the shore or levitating from his penthouse apartment to the street below… so I’m just doing my part to keep the guy’s feet on the ground, so to speak)

…when she saw that jerk-off Brad Pitt play the part of the dangerously-sexy yet irresistibly-compassionate vampire Louis on the big screen alongside that jerk-off Tom Cruise (now HIM I call a j/o for altogether different reasons.)

After ‘The Vampire Chronicles’ I think there was a long dry-spell… but then came the ‘Twilight’ series, which spawned its own movie, and somewhere in there HBO gave us ‘True Blood’ (a fresh new season just started up last night) and then most recently Kim became madly addicted to the Vampire Wars game on FaceBook.

At this point, I think it’s clear that it’s only a matter of time before I wake up to this sight… 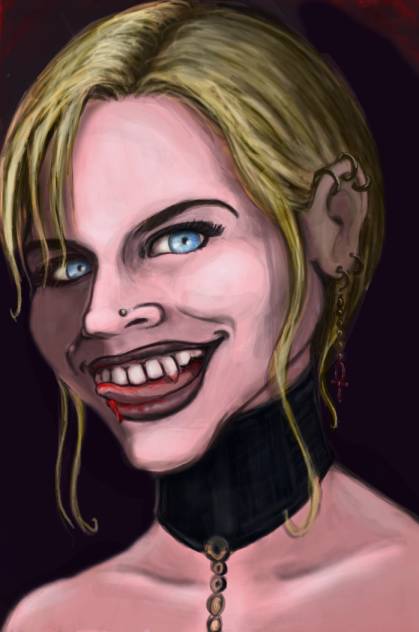 She does make a hot vampire though, doesn’t she?  I’d let her bite me… I think?