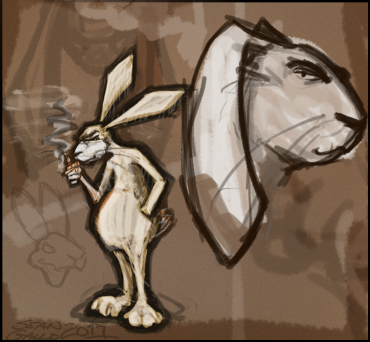 The White Rabbit from Lewis Carroll’s ‘Alice in Wonderland’ is one of the great examples of iconic characters that have crossed over from literature into other media… from Jefferson Airplane’s psychadelic anthem, to Walt Disney’s kid-friendly animation, to a (none-too-subtle) reference in the Matrix, to American McGee’s video game, and Tim Burton’s recent CGI-filled film… for a character who wasn’t the main antagonist, nor main protagonist – and who appears in relatively little of the original story – the White Rabbit just captures folks’ imaginations… including mine.

With some encouragement from a friend, I’ve decided to try and craft my own version of the White Rabbit character, and to post various drafts as I work to tune in on the end result… this is the first edition.

Self-critique:  I think this White Rabbit is too angry, in a grumpy way… and also too dirty looking.  In my next round with this character design, I’m planning to push in a more subtley-sinister, and well-heeled direction.  I’d like my white rabbit to be dangerously charming.

iF i WeRE KInG

If I were King…

And do great things…

And have a lot of fun…

Have a Hoopy Towel Day!

May 25th is Towel Day.  The holiday was established by fans of the late, great Douglas Adams … comedic-writer, satirist, and author of ‘The Hitchhiker’s Guide to the Galaxy‘ (in all it’s many published forms.)

Why ‘Towel’ day?  See this excerpt from the ‘Ultimate Hichhiker’s Guide’:

Towel: Just about the most massively useful thing any interstellar Hitchhiker can carry.

For one thing it has great practical value – you can wrap it around you for warmth on the cold moons of Jaglan Beta, sunbathe on it on the marble beaches of Santraginus Five, huddle beneath it for protection from the Arcturan Megagnats as you sleep beneath the stars of Kakrafoon, use it to sail a miniraft down the slow heavy river Moth, wet it for use in hand to hand combat, wrap it round your head to avoid the gaze of the Ravenous Bugblatter Beast of Traal, and even dry yourself off with it if it still seems clean enough.

More importantly, a towel has immense psychological value. For some reason, if a strag (strag: non-hitch hiker) discovers that a hitch hiker has his towel with him, he will automatically assume that he is also in possession of a toothbrush, face flannel, soap, tin of biscuits, flask, compass, map, ball of string, gnat spray, wet weather gear, space suit etc., etc. Furthermore, the strag will then happily lend the hitch hiker any of these or a dozen other items that the hitch hiker might accidentally have “lost”. What the strag will think is that any man who can hitch the length and breadth of the galaxy, rough it, slum it, struggle against terrible odds, win through, and still knows where his towel is is clearly a man to be reckoned with.

Hence a phrase which has passed into hitch hiking slang, as in “Hey, you sass that hoopy Ford Prefect? There’s a frood who really knows where his towel is.” (Sass: know, be aware of, meet, have sex with; hoopy: really together guy; frood: really amazingly together guy.)

~ Douglas Adams, The Hitchhiker’s Guide to the Galaxy

A little while ago I found the DeviantArt website, and staked out a page for myself.

Little by little I’ve been adding some drawings to my DA page.  I haven’t attracted much attention, but I haven’t really been trying either.  Just dipping in one toe for now.

One caution before you bop over to DA… I have gotten hit with that crap-ass phony Windows Antivirus Pro spyware several times while browsing their site… which totally sucks, but it’s the only site of its kind that I’ve found, so I’ve put up with it.

By the way – if you have gotten whacked with that fake Antivirus horseshit – the best tool I’ve found for cleaning it up is a freeware version of MalwareBytes Anti-Malware… you can download it through CNET/Download.com

UPDATE:  I’ve pretty much abandoned the DeviantArt website… at least for now… after getting infected AGAIN while visiting their site… both my personal home computer AND my office computer got crapped-up :(

Oh well…moving on, I guess…

So I’m a designer… sort of.

I mean, I think it’s fair for me to call myself a designer, but I guess the point could be argued in either direction.

On the one hand, I’ve held many different jobs, and pursued many different activities in my life… and at no point (as far as I can remember) have I ever actually held the title of “designer”.

But on the other hand, I definitely have designed plenty of stuff.  From album covers and show posters for my teenage bands, to a gigantic hill-side easel for holding a massive wall mural (later installed in theme restaurant) that I designed and painted with some friends, to interactive multimedia training applications for delivery on the Inter-webs.

The more time I spend taking stock of my experiences and my skills, and the more I think about my strengths and my interests, the more comfortable I feel describing myself as a designer.

So if we can agree for the moment, that I am a designer… then why this blog?  Well, a very good friend of mine has been riding me for years to “just get some of your work out there”… I guess maybe he finally got through.

Also – I’d recently gotten tasked with some writing assignments at work… and after struggling for a bit without really gaining any momentum, I started searching things like “How to write a functional spec”.  One of my searches turned up an article that advised something to the effect of “The first thing to do is to start writing… write anything at first – just to get the wheels turning… keep a journal – start a blog…”

So, I figured what the hell, and I grabbed a piece of real estate here on WordPress.  As I start out, I figure this blog is going to be a way for me get my rusty writing skills back in motion, and in the process I’ll share some of my design-related work and ideas, and basically “get some of my work out there”.